Home Theatre Projectors for the Cinephile in You

So you have decided to build yourself a home theatre system. You’ve hired your media electrician to install new sockets and run cabling to your desired room, you’ve painted the room and bought soft furnishings, so the next part is buying the components to build your system.  You will find there is so much information to absorb, every product out there seems better than the next, and you will find yourself unsure about which to buy. Here are a few things to keep in mind when shopping for a new home theatre projector.

There are two main types of projectors on the market; DLP and LCD. DLP stands for digital light processing. It was invented by Texas Instruments, and utilizes a microscopic array of over 2 million mirrors. DLP has a higher contrast than LCD, but there are some unfavourable consumer reports that note something called the “rainbow effect”. The “rainbow effect” is noticeable when looking from one side of the screen to the other and is characterized by a sudden burst of colour.

LCD stands for liquid crystal display. These projectors have three distinct glass LCD panels inside; one for each component of the video signal (red, green, and blue). While DLP chips reflect light, the LCD panels allow light to pass through them. LCD projectors produce brighter images, and they are known for having excellent colour saturation. In the end, you will be hard-pressed to notice a great difference between the two types of projection systems.

When shopping for a new projector, keep your particular needs in the forefront of your thoughts. As mentioned above, it is really easy to lose yourself in the minutiae of each particular system. Connectivity is a something to be mindful of. Make sure that you are able to connect all your components, including your gaming system. Nothing beats playing Halo in real-life size! Contract ratio is another important factor; the higher the ratio, the better the picture will be.

The brightness of your projector is another thing to consider. Light output is measured in ANSI (American National Standards Institute) lumens. You will want to avoid a projector that produces anything shy of 1000 lumens. As you are likely aware, the projection resolution is extremely important. This refers to the number of pixels that can be displayed on the screen. Go for something that is no less than 1024×768, as this will allow you to fully appreciate the depth and quality of HDTV. In the end, you should buy the projector that is in line with your needs and your budget.

One thing to consider with your new projector is where you are going to place it in the room. Usually they are mounted onto the ceiling to give you an optimum picture while out the way of accidental damage. If you are struggling to affix the projector yourself, consider hiring a professional in home theatre installation, or even a local builder or handyman who will be more than capable of getting your projector in the desired location. 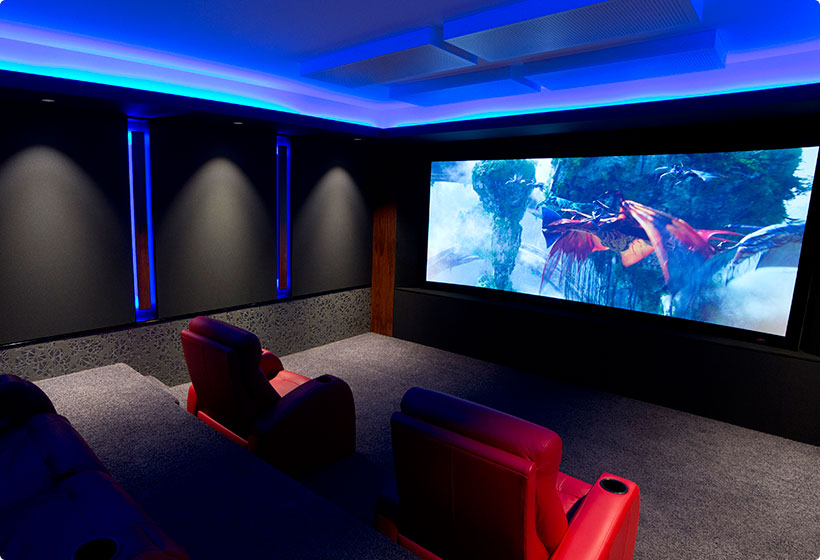 When it comes to choosing the cabling, you may be confronted by a variety of “extreme” sounding names for cabling: Mega Cables, Monster Cables, Uber Cables… the proliferation of “boutique” cabling is always a source of controversy in home theatre and audiophile circles. The question is, how much difference do they make, and are they worth it? Well despite the perils involved in even mentioning this topic, I’m going to attempt to add something to the discussion.

The most important thing to recognize is that a cable cannot improve the sound of a home stereo system any more than an electrical wire can create extra electricity when you plug it into the wall. That’s actually a very good example, because when you’re listening to audio for instance, what we’re hearing is an electronic representation of acoustic sounds – that is to say, the actual sounds have not been captured and stuffed into a compact disc like fireflies in a child’s jar – they have been copied, imitated, and a representation stored on the disc as a series of numbers.

These numbers are then read and translated into electronic signals, which are sent to the speakers in order to approximate the actual sounds. With that in mind, it makes sense that poor quality wires don’t physically change the sound – instead it’s like a game of ‘telephone’, in which the band tells the CD, the CD tells the player, the player tells the wires, and the wires tell the speakers, with something being lost at every step so that the message “Aunt Betty baked a pie” is altered to “Fat Eddy wants to cry” or what should be a great live recording sounds tinny, distant, or otherwise just plain wrong.

A good cable will change the signal as little as possible, but all cables do damage your signal a bit – it’s simply a matter of degree. As far as which cables are the best? That’s up to you or your local audio guru to decide – much is up to personal preference, with the rest probably being left up to your budget to decide.